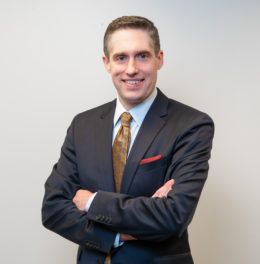 Justin is a Seattle-Tacoma personal injury attorney whose practice is devoted to representing badly injured people who were victimized by others. Justin represents a wide range of clients including childhood sex abuse victims, families of wrongful death victims, children injured at daycares and schools, dog attack victims, and people who have suffered catastrophic injuries due to falls caused by the negligence of property owners. Justin fights tirelessly to make sure injured people get a fair shake from the insurance industry – whether through hard-fought negotiation, mediation, arbitration, or in front of a judge and jury. Justin is licensed in Washington State and federal court.

Justin was raised in Snohomish County, Washington before attending the University of Washington, where he graduated with honors. Following college, Justin obtained his juris doctorate from the Seattle University School of Law and a Master of Laws from the University of Washington School of Law.
Justin’s roots are firmly planted in the Puget Sound area and throughout Western Washington. He chooses to make this region a better place by ensuring those without a voice are heard and that victims of injuries find justice.

$400,000.00 settlement for a high school student who suffered a serious eye injury at school.

$260,000.00 settlement for a woman injured when she tripped on a defective City of Seattle Sidewalk.

$200,000.00 settlement for a woman injured when she tripped on a defective City of Seattle Sidewalk.

$150,000.00 settlement for a man injured when he slipped on liquid spilled on the floor of a store.

$100,000.00 settlement for a victim of neglect and wrongful death in an assisted living facility.